Autoimmune disease comes in many forms. There are over 80 different types, with more being discovered all the time. Dr. Doni discusses the epidemic of autoimmunity and how epigenetics play a part in both creating them and healing from them.

Many people come to me for help after being diagnosed with an autoimmune condition (or symptoms of autoimmune conditions even if there is no diagnosis). I always tell them the same basic thing. On the one hand, autoimmune responses are serious business because they are often the gateway to more serious disease conditions. On the other hand, they are not a cause for you to give up all hope of recovering from, as many conventional practitioners would have you believe.

Autoimmune disease can be healed. In fact, these days thousands of people a year are able to do just that by first learning why autoimmunity is happening to them and then putting into place specific strategies to shift the immune system back into balance.

An Epidemic of Autoimmune Disease

In the U.S. alone, there are roughly 50 million individuals who have been diagnosed with one of the 80+different conditions known to be autoimmune at this point in time (more are identified all the time). What’s more, there are potentially thousands of other individuals who may be displaying symptoms but have not yet been officially diagnosed. Of those who have been diagnosed with an autoimmune condition, 75% are women.

On a very real level, I know what it is like to suffer from the often confusing laundry list of symptoms connected to autoimmune disease. For years I struggled with the debilitating side effects of a rare joint-related autoimmune disease. What’s more, the genetic propensity to manifest an autoimmune disease runs in my family. Both my mother and my father have been diagnosed with one. We will get more into how both genetics and epigenetics play a role in the development of autoimmune disease a little bit later in this article.

Another thing that most people don’t realize is that there IS a way out of the downward spiral that is autoimmunity. This is a good thing because the research also confirms that having autoimmunity, as well as taking the pharmaceutical treatments for autoimmunity, increase the possibility of other conditions, including cancer and infections.

I am happy to say that I am amongst the success stories when it comes to healing autoimmunity. I learned how to help my immune system work with me not against me again, and you can too!

What is an Autoimmune Condition?

Traditional medicine defines an autoimmune disease (or an autoimmune “condition”) as one in which the body, or more specifically the body’s immune system, is attacking itself. Ultimately, the immune system’s job is to protect you from foreign “invaders,” whether they be viruses, toxins, or a mutated cell. In the case of autoimmunity, the body mistakes good cells for bad ones. Once it does this, it begins the process of going after and destroying those healthy cells. This results in the destruction of tissues and organs. And because the immune system’s energy is being diverted into attacking healthy cells, the real threats to the body such as infectious viral pathogens, toxins like mold, and mutated cells that can turn into cancer, are allowed to slip through the cracks.

Other symptoms may include chemical sensitivity, sudden intolerances or allergic reactions, and brain fog.

Again, autoimmunity is when the body “auto attacks,” i.e. attacks itself. This can happen anywhere in the body and within any mechanism (or within several mechanisms at once). That is why specific symptoms, other than the ones mentioned above, are sometimes hard to pinpoint as autoimmunity. For example, Hashimoto’s thyroiditis is a common autoimmune condition that is often missed because the symptoms vary in each person and may be mild at first, before even causing hypothyroidism or underactive thyroid. That is definitely one possible outcome of Hashimoto’s, but so is overactive thyroid sometimes as well!

Mainstream Medicine Does Not Know How to Reverse Autoimmunity

Autoimmunity is often first discovered within a conventional setting (at a clinic or at a hospital) when an ANA blood test signifies a high presence of certain kinds of proteins, i.e. antibodies. High ANA levels may indicate an autoimmune response. The doctor then usually does more tests to narrow down the type of autoimmunity based on the specific type of antibodies that are present (of which there are thousands of possibilities). He or she will also look at your symptoms and family history to determine how autoimmunity may be affecting you.

After testing and initial treatment, conventional medicine often stops being helpful for those with autoimmunity. While, depending on the severity of symptoms, pharmaceuticals may be necessary to decrease inflammation and pain (such as NSAIDS and corticosteroids), they are not good long-term solutions, nor will they reverse the autoimmune process.

Mainstream medicine then tends to turn to pharmaceuticals intended to take over the function of the affected organs (such as prescribing Synthroid for Hashimoto’s) or cut off some of the mechanisms of the immune system itself, as is the case for immunosuppressive biologic medications, such as Remicade, Enbrel, and Humira. This type of drug therapy is sometimes very necessary in order to prevent the autoimmune antibodies from causing severe damage or the need for surgery. In the long run, however, they often stop working and increase the risks of other health issues, so patients find themselves in a never-ending state of fear of how to stop the autoimmune process without causing more harm to themselves.

Unfortunately, most practitioners are not aware that it is possible to turn off the autoimmune antibodies AND be able to avoid the risk as well medications and surgery, in many cases. It does require diet changes and a willingness to think about what turned on the autoimmunity in the first place.

Once we understand the underlying triggers for autoimmunity in your body and address them by giving your body the support it needs to have balanced immune function, autoimmunity can be reversed, and stay that way.

Be sure to always consult with a qualified natural health professional like myself for advice before you make a decision about how to address your autoimmune condition. It is important to take a step-by-step approach in order to assure that you don’t slide into a flare, nor experience negative effects from any treatments, pharmaceutical or otherwise. We can work side by side with medications and your rheumatologist to guide your body back to health.

Research has come a long way in discovering why autoimmune conditions occur and why so many people these days have them. That being said, there is still a lot more to discover.

One thing is for sure. Even if there is a genetic propensity for a particular kind of autoimmune condition (and there often is), it takes a particular stressor (and oftentimes more than one stressor) to “kickstart” the response in the body.

The ways in which outside stressors (i.e. any stressor that exists outside of a person’s genetic code) are able to affect the expression of a person’s DNA is called epigenetics. Some examples of epigenetic factors that can be catalysts for autoimmune reactions include environmental toxins, viral infections, certain foods that a person may be intolerant to (like foods with gluten in them), imbalance of the microbiome (bacteria and other organisms in our bodies), and emotional stress and trauma.

On the other hand, just because you have genetic variations associated with autoimmunity doesn’t necessarily mean you are absolutely going to get an autoimmune condition. Genetics plays a role but is nowhere near being the determining factor. In fact, genetics is often less than 10% of the risk equation.

Genetic dispositions need the right environment (i.e. at least a few specific epigenetic stressors) in order to manifest as a disease. Each stressor you “pile on” however, will create the potential for “waking up” these propensities! And once they begin to wake up, a “cascade of confused immune and nervous system signals” can spread throughout the body, turning on the genetic expression of autoimmunity and inflammation. Systems that were designed to protect can turn into your worst enemy.

Knowing both your genetic predispositions and your specific “stress exposure” points is absolutely vital for true healing to occur. This is what I refer to as your unique “Stress Fingerprint.” You can find out more information about discovering your own STRESS FINGERPRINT here.

Another thing that is for sure according to autoimmune research is the connection between Leaky Gut and autoimmune conditions. Almost all people who have been diagnosed with autoimmune disease have some kind of gut-related issues, whether it is food sensitivities, IBS, heartburn, random gas and bloating, pain, SIBO (overgrowth of bacteria), and/or a general imbalance of the organisms living in the gut. These issues are not just inconvenient symptoms of autoimmunity. They are also manifestations of the underlying second-level cause of the autoimmunity itself called Leaky Gut.

In Part 3 of this series, I plan to go into depth about this connection and the strategies that you can put into place in your own life to heal your gut and autoimmune disease at the same time!

You CAN Reverse Autoimmune Disease Naturally

It is absolutely possible to turn autoimmunity around and experience the defensive support your immune system was designed to provide. And you can do this naturally, without having to rely on long-term pharmaceutical use.

It all has to do with shifting the immune response to a positive one by changing both the internal and external environment that the body operates in. Some ways to do this (which I will be going over in-depth in coming articles) include: 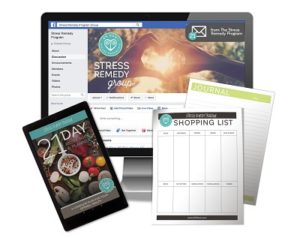 Instead of suppressing the immune system, we aim to SHIFT IT into a better balance. You CAN do that naturally and with ease and I can show you how! A great place to begin is with my 21-Day Self-Guided Stress Remedy Program where I teach you to recover from stress and start healing Leaky Gut.

But if you’re ready to consider going further, I designed a complete Autoimmunity Solutions Program where I can help you determine exactly which stress is a trigger for you and what imbalances this stress has caused in your body. We’ll identify the root cause(s) of your condition(s) and then put you on a path to reverse it. There are three key steps to do this:

Once we find the trigger, I work closely with you to design a unique, step-by-step strategy to re-optimize and rebalance your bodily systems. We’ll make simple diet and lifestyle changes and help you eliminate your specific environmental triggers.

I get such great results  from this program, and my patients get back to living a healthier, drug-free, and symptom-free life.Learn more about the program here: Dr. Doni’s Autoimmunity Solutions Program.

Wellness wishes to you, always!

Dr. Doni is the best selling author of The Stress Remedy (2013), Stress Remedies (2014), Stress Warrior (2018) and The Natural Insomnia Solution (2018). She is an international speaker, including at naturopathic medical schools and naturopathic conferences from Hawaii and Vancouver, BC to New Hampshire and New York.

Her research and approach to health optimization has been featured on TV, radio, podcasts, and print, including GOOP, Natural Solutions Magazine, First for Women Magazine, Huffington Post, Elle Magazine, Inspiyr Magazine, Mind Body Green, Energy Times, Fox News, and more. She publishes a blog and podcast at DoctorDoni.com, and is the owner of Nature Empowered Nutritionals and Cat Care, a not-for-profit dedicated to animal rights.

Are you a current patient or is this your first appointment?